Captain James Henry Sevier who had served the British Indian Army for five years and his wife Charlotte Elizabeth Sevier, met Swami Vivekananda in England in 1895.
In 1896, the Swami and the Seviers travelled for several weeks through Switzerland, Germany, and Italy.
In the Alps, Swami Vivekananda expressed a desire to have a mountain retreat for monks in the Himalayas. In December 1896 the couple went to India to follow the teachings of Swami Vivekananda and with a plan to buy a place near Almora and set up an Ashram similar to what Swami Vivekananda had described.
The Seviers purchased land near Almora in 1898.
Set amidst deodar, pine and oak forests; the land had been a tea farm and estate. read more 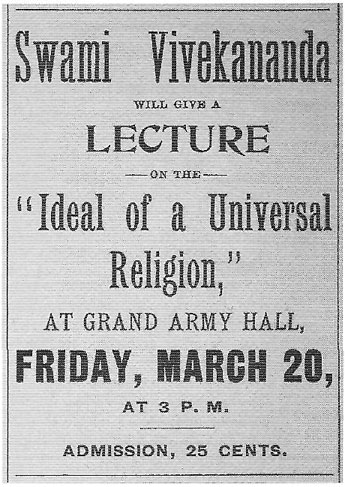 An advertisement in the ‘Medford Mercury’ newspaper on March 20 1896 announcing Swami Vivekananda’s talk on ‘Ideal of a Universal Religion.’ (The ad also ran the previous week).
Time: 3 pm
Location: Grand Army Hall, which was the home of Medford’s Civil War veteran’s organization.
Address: 48 High St., near the center of Medford Square. read more

The Art Institute where Swami Vivekananda made his historic speeches at the Parliament of Religions in September 1893. It was then called the Memorial Art Palace. read more

So in accordance with the good-will of this saintly house­holder (Surendranath Mitra), whom Sri Ramakrishna had tenderly called aDand  or demon of Shiva, the monks secured that house which became the Baranagore monastery. This was situated midway between Dakshineswar and the City of Calcutta, it was a dreary place. For years it had had no tenant. For years it had the appearance of being deserted. It was in fact in a ruined condition and sadly in need of repair. Besides being very old, it had the reputation of being haunted. It was two stories in height, but the lower story was absolutely useless, being the resort of lizards and snakes. The gateway had long since tumbled down. The verandah which flanked the front part of the upper story showed signs of decay; the main room at the back part where the monks lived was in a most dilapi­dated state. Indeed, none others would have lived there for fear of the building giving way. To the east of the building was another house which was used as a sort of chapel where the family-God of the owners was worshipped by resident priest. To the west was a garden overgrown with weeds and tall brush and undergrowth so that it resembled a jungle. The rooms of the ground floor were never occupied during the time the monks remained there except one in which lived the gardener of the landlord. They were exceedingly damp and dingy, and filled with all sorts of rubbish which several generations of landlords had allowed to accumulate and made no effort to remove. The garden was peopled by tall Sovanjan and mango trees, and a Vilva tree, giving a sombre aspect to the place. At the back part was a pond which had become overgrown with moss and was the breeding-place of mos­quitoes. The whole place was weird.
There were many thrilling tales current concerning dark deeds which, it is said, had been perpetrated in this house and compound, but this was of long ago, and, besides, the Sannyasin disciples of Sri Ramakrishna had no fear of ghosts. The monks had chosen this dreary retreat because of its cheapness, but especially because it was adjacent to the Baranagore burning ghat where the body of the Master had been consigned to the flames. They desired to be near the sacred river also, as their Master always did, and the Baranagore monastery was but a few minutes walk from the Ganges. Here the monks were glad to live, away from the turmoil of city life, in the solitude where few cared to interrupt their days of meditation. read more