Taken from an article written by Protap Chunder Mazoomdar, which appeared in the Theistic Quarterly Review, October, 1879. read more

When I first began to visit Sri Ramakrishna, I often felt like crying. One night at Dakshineswar, by the bank of the Ganges, I wept to my heart’s content. In the meantime the Master had been asking for me. When I returned to his room, he said: ‘You know, if you weep before the Lord, your tears wipe out the mind’s impurities of many births, and his grace immediately descends upon you. It is good to weep before the Lord.’
“Another day I was meditating at the Panchavati. I was absorbed. Sri Ramakrishna was returning from the pine grove. When he looked at me, I began to sob. The Master stood beside me without uttering a word. A thrill went through my heart, and I began to tremble uncontrollably. Later I followed the Master to his room. He remarked to someone about my weeping: ‘These are no ordinary tears; they are tears of ecstasy.’ Then he made me sit near him and gave me something to eat. It was so easy for him to awaken the kundalini in us—without even a touch, just by his presence.” read more 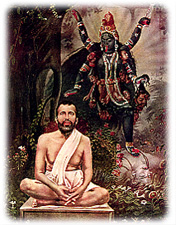 Q and A posed to Ramakrishna
Below are questions placed before Ramakrishna at various times and his answers:
Q. How to find God?
A: By the conquest of lust and gold.
Q:Is God Personal or Impersonal?
A: He is both, and yet He is beyond both; beyond any intellectual or theological dogmas. He is manifest to the soul in its own inmost realization. He assumes any form for the pleasure of His devotee. He is inexpressible. . . . He is not to be found between the covers of a book or within the walls of a temple. read more

Differences between worldly men and the monk 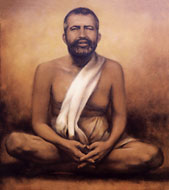 However much you may wash the pot where garlic has been kept, still some smell will linger. The boys are pure. They are as yet uncontaminated by any idea of lust and gold. You have seen mangoes that have been pecked by crows. Such mangoes cannot be offered to God or eaten by man. The devotees who have tasted worldly pleasure belong to another group.
A group of monks was seated together thinking of God. Some women passed by. One of the monks opened his eyes wider and cast oblique glances at them: he had renounced the world after being the father of three children. You cannot expect figs from thistles. Worldly men have no leisure to think of God; but do you think I hate them? No, not at all. I find God has become all these. I look upon all women as my Mother. So I find no difference between a chaste woman and a girl of ill fame. . . . I find everyone seeks glass beads: no one wants diamonds. Man is enchanted by lust; he is caught by the glamour of riches; but to one who has seen God, these are worthless trifles. Someone said to Ravana, “You go to Sita assuming all sorts of forms in order to intimidate or seduce her. Why don’t you take the form of Rama so that she may take you for her husband?” Ravana replied, “If I meditate on Rama, even the moat exquisite beauty of the world appears as mere straw.”
Devotion to God is impossible without purity of heart. An impure man cannot have single-minded devotion. His mind is diverted to various things. You cannot expect anything when you are attached to lust and gold. It is extremely difficult for a worldly man to be perfectly unattached. He is a slave to his wife, slave to his money, and slave to his master. read more

(1884) Sri Ramakrishna was in his room at Dakshineswar surrounded by disciples, including Naren.
The Vaishnava religion.
This religion enjoins upon its followers the practice of three things: relish for the name of God, compassion for all living creatures, and the service of the Vaishnavas, the devotees of the Lord. The real meaning of these precepts is this: God is not different from His name; therefore one should always repeat His name. God and his devotee, Krishna and the Vaishnava, are not separate from one another; therefore one should show respect to all saints and devotees. Realizing that this world belongs to Shri Krishna, one should show compassion to all creatures.”
Hardly had he uttered the words “compassion to all creatures”, when he went into Samadhi. After a while he came back to a semiconscious state of mind and said to himself: “Compassion for creatures! Compassion for creatures! You fool! An insignificant worm crawling on earth, you to show compassion to others! Who are you to show compassion? No, it cannot be. Not compassion for others, but rather the service of man, recognizing him to he a veritable manifestation of God.” read more

Comments to his disciples

Ramakrishna said to his disciples:

There are many opinions and many ways. I do not like them any more. The aspirants of different ways quarrel among themselves. You are my own people. There are no outsiders here. I tell you, I clearly find that He is the whole and I am a part of Him. He is the Lord and I am the servant. Again sometimes I think that He is I and I am He. read more

Sri Ramakrishna on Himself

As for myself, I look upon all women as my Mother.

(Sri Ramakrishna said to his disciples) I clearly find that He is the whole and I am a part of Him. He is the Lord and I am the servant. Again sometimes I think that He is I and I am He. read more

‘The story of Sri Ramakrishna Paramahamsa’s life is a story of religion in practice. His life enables us to see God face to face. No one can read the story of his life without being convinced that God alone is real and that all else is an illusion.’
– Mahatma Gandhi (Oct 2, 1869 – Jan 30, 1948) read more

The Kali temple at Dakshineswar, four miles to the north of Calcutta, on the eastern bank of the Ganges, was founded by Rani Rasmani. She died before Naren came to Dakshineswar. read more

Sri Ramakrishna visited the house of Dinu Babu (in North Calcutta ) one day, and my second brother, Girish, went to see him. When he returned I asked him: “What is this man like?” “A hypocrite,” he replied. Thus I was dissuaded from making any further inquiries about the Master. But my brother soon became a frequent visitor to Dakshineswar, and I began to observe that Deven Babu and my brother were always whispering about him, keeping everything secret from me. One day, probably in March 1885, I came home to find Deven Babu and Haripada with my brother, and when I entered the room they began whispering as usual. “What are you whispering about?” I asked. “Is it about the Paramahamsa? Your Master is not a Paramahamsa, he is a Rajahamsa. He wears a red-bordered cloth, beautiful shirts, polished slippers and sleeps on a comfortable bed.” It was in this vein that I was talking when Sri Ramakrishna entered the room, accompanied by Narayan, saying: “Girish, it is by the grace of God that I have come to you.” The Master had crossed the courtyard and climbed the steps to the first floor without any of us being aware of his presence until we heard his voice. My brother and the others saluted him by lying full length on the floor, and since it was our family tradition that `a brahmin should be respected’, I too saluted him, with folded hands. The Master then took a seat and my brother sat in front of him while the rest of us sat in a circle around him. My brother, Girish, introduced me saying: “This is my younger brother, but he has just been criticising you.” Then he looked at me and said: “Why are you silent now? Are you charmed by his presence?” I was somewhat embarrassed but not at all fearful or intimidated by the Master. So I said to him: “Sir, you are not a Paramahamsa, you are a Rajahamsa – that is what I was saying when you arrived.” Whereupon the Master said to my brother: “But this is not a criticism. When milk and water are mixed together, the swan separates them and drinks only the milk. Moreover, if you go to Varanasi you will find innumerable Paramahamsas all over the place, and he has made me their king. It has been well said.” I could see that the Master was very intelligent and was not to be caught out by my comments. I wanted to test his ego, so I asked: “Sir, what is your name?” Caressing my back, the Master replied: “Do we have names?” `Hei,’ `Hallo’ – in this way one can call me and I will know who is being called.” “What is this?” I thought to myself. “Is he reading my mind?” I knew a little about thought-reading and had practised it for some time. Anyhow the Master continued: “Before today I was a little frightened of you. The other day I was passing by your house. Knowing that Girish was not at home, Narayan, who was with me, pointed out to me that you were seated on the veranda and asked whether he should speak to you as to the whereabouts of Girish. I forbade him to and we went on to Balaram’s. Seeing your long beard I was frightened of you, but now it is all gone.” “Sir,” I replied, “how do I know the cause of your fear and why it has gone away today? I am the same man with the same beard.” About that time, M., Paltu, and the younger Naren entered. The Master said (to M.): “Welcome, O three-and-a-half degree holder, come in.” They saluted the Master, smiling at him, and took their seats. The conversation got underway with a discussion as to whether God is formless or with form. Then came the question of knowledge and devotion – which was the higher way. The Master: “Both are the way and one can attain God through both of them. The path of knowledge and the path of devotion both lead to the same destination, and after arriving there one understands that pure knowledge and pure devotion are one and the same.” The conversation continued in this way for a time and then all left. As time passed I learned that many devotees always took something to the Master when they visited him. I rarely presented anything to him. One day, sitting near the Master at Cossipore, I was thinking to myself that it would give me so much pleasure if he would ask me to bring him something. Immediately he said: “My stock of barley has run out. Rakhal, would you check the can?” Rakhal opened the can and found it empty. Then the Master asked me: “Could you buy a can of barley for me and bring it tomorrow?” I hesitated since it would not be possible for me to bring it the next day. Right away he said: “Please buy the barley tomorrow morning and send it to Balaram. Inform him that I have no barley and that it must reach me without delay. He will make the necessary arrangements.”